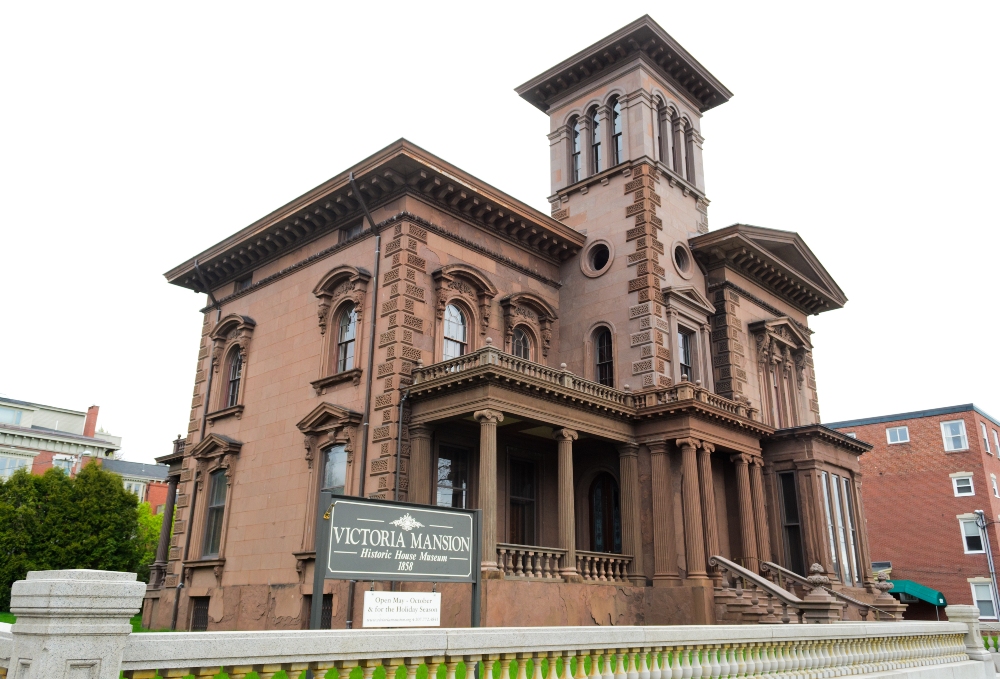 Historic mansions were usually family homes, built for large families; but the Victoria Mansion was only built for a husband and wife – Ruggles and Olive Morse. Built over the span of two years, this summer home was finished in in 1860.

Both Ruggles and Olive hailed from Maine; however, the Morse’s riches came from Ruggles’ successes in New Orleans as a luxury hotel operator. Henry Austin, an architect from New Haven, Connecticut, is responsible for the design of the home. It is famed as the best example of Italian Villa architecture in America. The home was built strategically along one of Portland’s first sewer and gas lines, allowing for modern elegance with the convenience of running water, both hot and cold, flushable toilets, a central heating system, and much more.

Influential German cabinetmaker, Gustave Herter, was hired as the interior designer. The Victoria Mansion is the only surviving work of Herter’s that remains fully intact. The scope of the home was entirely lavish, with plasterwork intricately finished, large mirrors, and plush fabrics.

The Morse’s lived in the home for over thirty years. Ruggles passed away in 1893, and in 1894, his widow sold the mansion with the majority of its furnishings to a rich merchant, J. R. Libby, whose family made this their home. The Libby family made very changes to the land, and preserved the home in its intricate fashion. This was the Libby family home for over thirty years, also.

In 1940, the home was in need of rescue, as it was threatened with uncertainty. The following year, it opened as a public museum.

The home has been strikingly well-preserved, including more than ninety percent of the original interior designs, such as the wall paintings by Guidicini, the master of the style of “fooling the eye.” In fact, many portions of the home warrant a double take, as it appears three-dimensional.

The institution of the Victoria Mansion continues to maintain the home, striving to maintain its original condition while still providing evidence of the home’s evolution throughout the years. When Ruggles Morse passed away, Olive took a complete inventory of the home when she was planning for its sale. This inventory list, and many photographs that exist of the home and its interior, have made it possible to know exactly where each item had been historically placed.