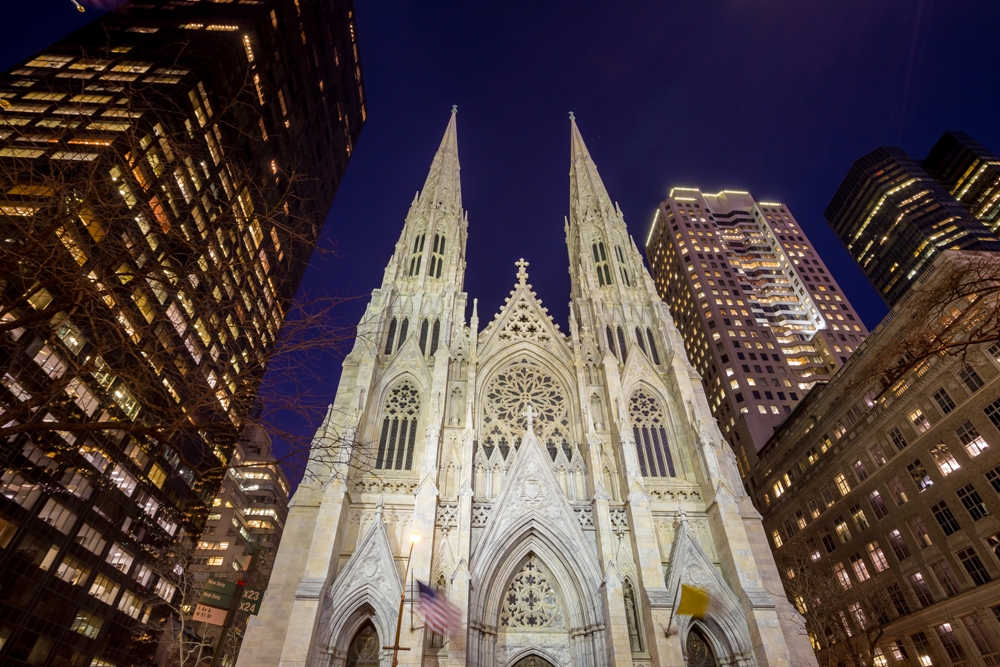 When it comes to these cathedrals, one can simply stop or look and pray…but one should stop for a visit either way, for even if lacking a traditional faith, these structures will restore nearly anyone’s faith in humanity.

It might be a cliché to place St. Patrick’s Cathedral at the top of any such list as this, but some clichés are simply too accurate to dismiss, and this is one such case. The cathedrals design is literally international in that various aspects of it originated in countries around the world. Some 5.5 million people a year visit and with good reason. One need not even enter to be astonished by its beauty, the exterior something like a baroque castle. The interior is all the more stunning, a long, domed structure supported by arches, the stained glass windows high above the pews. It would alone easily justify a visit to New York City.

Much like the first entry, there’s simply no honest way not to position the Washington National Cathedral near the top of this list. It also resembles St. Patrick’s in its Neo-Gothic, castle-like exterior. The interior is narrow and rectangular and yet, looking to either side or above, a wonder of curves, all illuminated by more than 200 stained glass windows. Its Sunday masses typically draw well over 1,500 visitors.

This cathedral, if not one in name, is easily the most modern on this list. Consisting of seventeen spires, the exterior befits the Air Force in that it resembles a hanger for some aircraft not yet invented. The interior’s most striking feature entails the rows of stained glass windows that rise from side of the building and continue across the ceiling all the wall to and down the other side, and would encircle the building were stained glass floors to make any sense!

Cathedral-Basilica of St. Louis King of France, Louisiana, NO

More often simply called St. Louis Cathedral, Built in 1718, nothing remains of the original structure. Instead, today’s version has a majestic exterior of three pure-white steeples. The interior features painted surfaces, including the ceiling, bringing to mind both French and Italian cathedrals. This French Quarter landmark truly stands above it all with its combination of Renaissance and Spanish Colonial architectural flourishes.

During the gold rush, many of those who made their way to California were seeking more than fortunes, and so San Francisco’s National Shrine of St. Francis of Assisi was established in 1949, yet ended up serving the local Spanish and Mexican population. In 1906, an organ caught fire and took with it the entire cathedral, which again burned down in 1945. After again being rebuilt, the church eventually acquired a magisterial thousand pipe organ. The interior of the rebuilt church is a wonder of arches actually “planted” in the middle of each of two rows of pews.