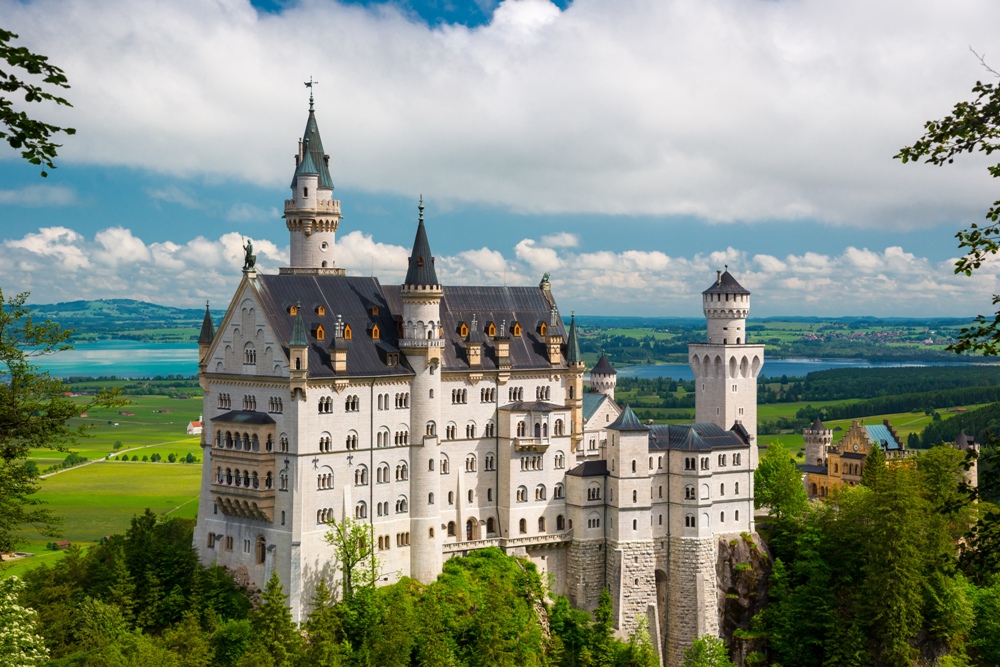 Neuschwanstein Castle is one of the most beloved castles, if not one of the most beautiful, in all of Germany. Groundbreaking began in June of 1868. More than 25 feet of rock had to be excavated and removed in order to have room for the castle’s foundations. The next summer, the access road had been built, and fifteen months after that, Ludwig I held to his strict traditions and placed not only coins from the time of his reign and portraits of the builder on the foundation stones, but also the building’s plan itself. The most modern of means (for the time period) were utilized in the construction of this amazing castle – foundations cemented, masonry of bricks and the lightest limestone.

After the gate was built in the summer of 1872, there was a ceremony, and the castle was ready for its first-ever occupants in the winter of 1873. The upper floor was the living quarters of Ludwig II. He was a recluse of a royal, and desired to be out of the public eye, and with the utmost protection from whatever it was that he may have been withdrawing from. His most special room in the very center of the castle was completely encased in iron. This is an odd detail, as he never considered this his residence, but more of a hideout.

Just shy of two months after his death, his special castle was opened to the public. It’s ironic how his special hideout has become a magnet for the public to see his magnificent construction from the inside. In fact, it is now one of the most frequented castles in all of Europe. More than a million people visit each year, which would have sent poor Ludwig into a tizzy had he lived to see it. His dear castle had been constructed with the idea it would have a mere one occupant – today, more than 6000 people flow through these rooms every day.

Because of the methods of construction, the climate in the region, and the sheer number of visitors, the castle is monitored daily for foundational movement and other erosion. The groundskeepers work tirelessly to maintain Ludwig’s castle for more generations.