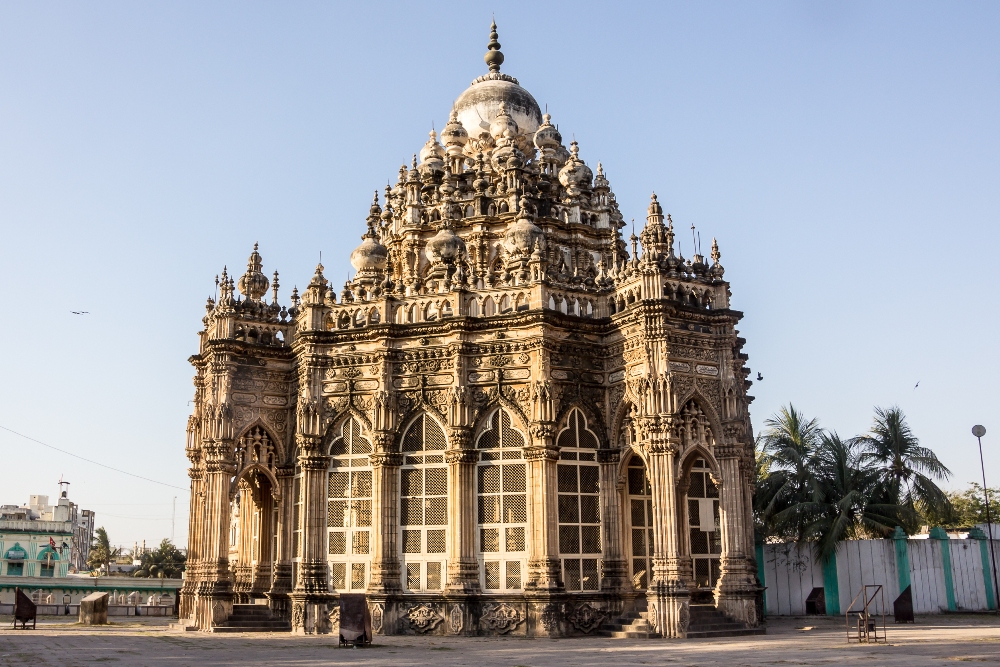 Although it lies on a much-traveled road in the heart of a city, Junagadh’s Mahabat Maqbara is one of the least-known complexes and, therefore, one of the best kept secrets in India. Its blend of Islamic and Gothic architectural styles is one that has never been seen before or since.

This yellow-walled compound saw its construction commence in 1878. It was not completed until 1892. More than a decade had passed, yet the intricacies of the carvings, both inner and outer, as well as arches, windows, and columns, hint that it should have taken much longer; however, a labor of love is oftentimes generously created in a blink of an eye.

When you consider the complexities of the nature of Junagadh’s history, the architectural mixings and stylings become much less difficult to understand. The city was established in 1748 and by 1807 was part of the British Protectorate. A mere eleven years later it would be handed to the East India Company’s control. While the remainder of the region over the years was dissolved into various territories, the actual placement of the Mahabat Maqbara was in a spot in which no one actually claimed gubernatorial power.

India gained its independence in 1947, and the then-ruler, Mahabat Khan III, decided to join forces with Pakistan, even though the two places did not share a boundary anywhere. He soon fled to Pakistan, and soon after Junagadh again became a part of India, only three months after having declared its independence.

Regardless of the political turmoil that has kept the lands and its peoples in such a tumultuous existence, the Mahabat Maqbara compound has stood the same as it stood upon its erection – quietly assuming the diversity of all the many influences surrounding its gates.

Visiting the Mahabat Maqbara complex is completely free of admission, and the entire mosque is open to the public. The mausoleum on the grounds can only be explored from the outside, however. It has been stated that visiting the interior of the mausoleum is possible, but prior notice and authorization must be obtained from a keeper of the mosque before your arrival.