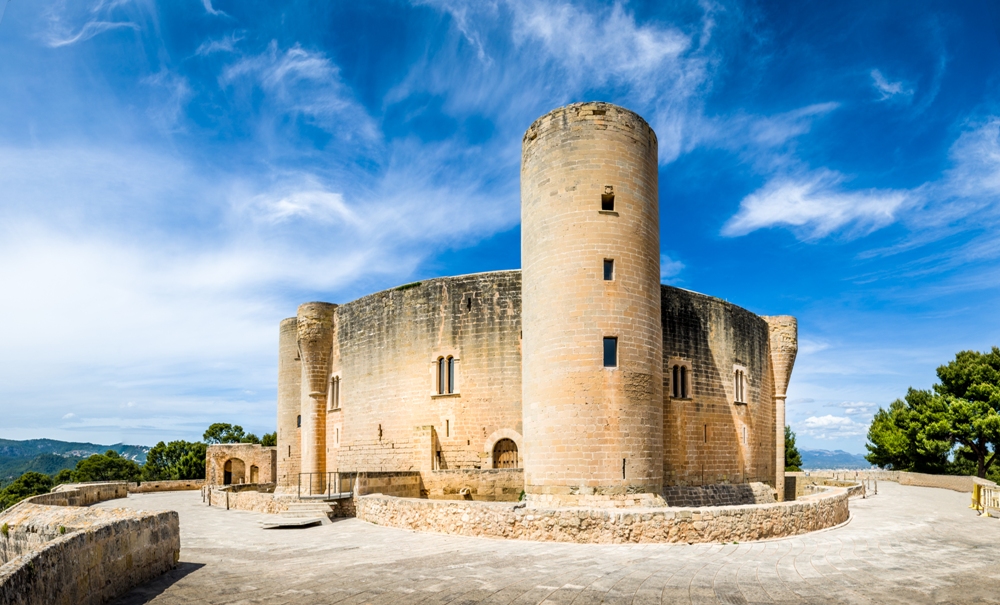 Roughly six miles outside of Palma, Spain is the dominating Bellver Castle. It covers nearly the entirety of Mallorca Island. Spain’s King James II ordered the castle to be built in 1300. The main portions of the castle took nine years to build, not including the ornamental designs that were added later. Around seventy subjects of the king resided within the castle walls, along with many women, children, and slaves to the king.

The castle, while built as a fortress, structurally sound to protect the king and his loyal followers, was meant to be a residence for royals. At one time, it was occupied by Joan I and the d’Arago court. Many other renowned individuals visited, including Queen Elizabeth II, Carlos I, and several other monarchs. It began as thee place to be for the “in” crowd.

By the 18th century, Bellver was converted into a prison for the military. By the 19th century, it housed not only the prison, but also the offices of the Finance and Justice Ministers during Carlos IV’s reign. During its tenure as a prison, several soldiers and infamous officials from France were held captive after their defeat in the Battle of the Bailen. General Lacy attempted to rebel and free his compatriots in 1817, but not only was the rebellion a failed one, Lacy lost his life in the battle. By 1821, the castle temporarily became a factory in which Spain printed their currency.

The layout of the castle is circular, like a dome whose top is missing. Three circular towers are attached to the castle itself while a fourth tower is approximately 21 feet from the castle. The castle was built around a courtyard in the middle, and has two floors – ground level and an upper level. The ground floor is decorated with half-moon arches while the upper level has triangular archways and vaulted ceilings crafted in the Gothic style of architecture.

In the early 1930s, the state gave the region to Palma’s City Council which now organizes all cultural activities, as well as runs the Museum of History and maintains the classical sculptures on the grounds.