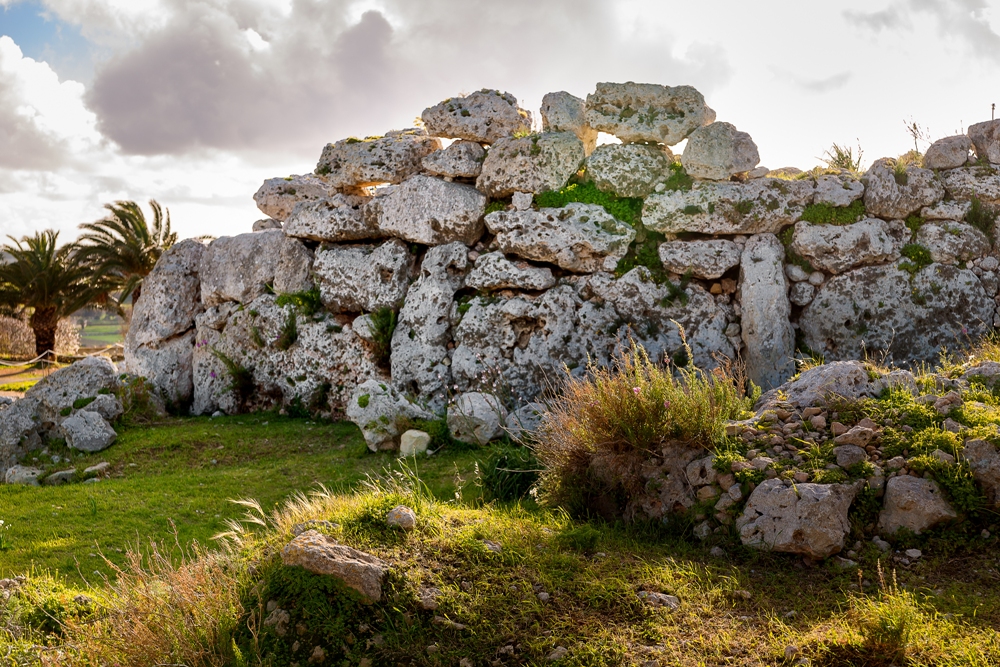 It isn’t difficult to spot the similarities between languages of peoples that have been handed down and morphed throughout the ages. The ancient temples on Malta’s islands have that effect – they’re called the Ggantija, which immediately invokes the English word ‘gigantic.’ In Maltese, ‘Ggantija’ comes from the root word ‘ggant,’ meaning ‘giant.’ It’s no surprise then that these sites, according to Maltese historical accounts, were home to an ancient tribe of giants.

Listed in UNESCO’s list of World Heritage Sites, the Ggantija Temples are one of Malta’s most archaeologically important sites, two of the temples of which date back to around 3600 BC. Despite their age, these temples have survived in a relatively well-preserved state. The enclosure’s coralline limestone boundary walls encircle the temples, many of the surrounding monuments are longer than fifteen feet and weigh more than 100,000 pounds.

Coralline limestone is one of the most extensively used materials at the temples’ site, and for good reason – this long-wearing stone is rugged enough to survive the ages, hence its amazing preservation. A softer limestone, called Globigerina, was utilized for the interior of the monuments, such as archways, doorframes, and altars. All of the temples at the site have several vaulted archways that flank the centrally-located corridor. According to fragments of plaster found at the site, it is thought that the interior was once quite ornately plastered, painted in a red ochre. The found fragments are on display within Gozo’s archaeology museum.

Animal bone fragments have also been discovered, suggesting that some form of sacrifice also occurred here. Sacrifice by fire is illustrated by the existence of several stone fireplaces within the temples. Several holes in the floor are thought to have been for offerings of the animals’ blood. There are large forecourts located directly in front of both temples, thought to be for the accommodation of the worshippers that came to be privy to the sacrifices.