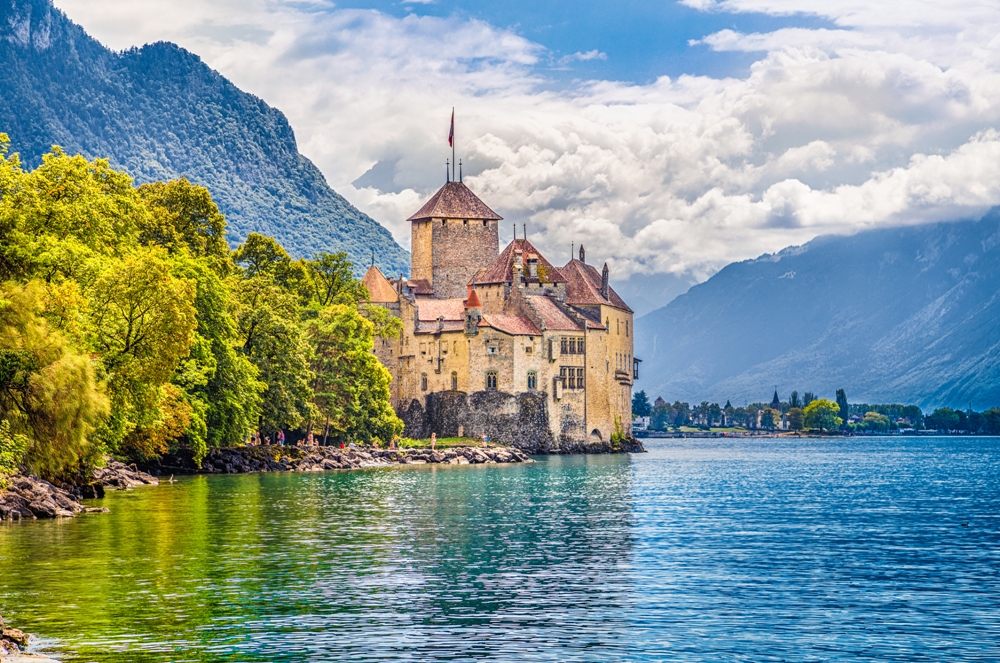 Castle Chillon in Veytaux, Switzerland – The way Castle Chillon looks today is nothing compared to its early years. Many renovations and additions have been made over the centuries of its existence to create the grand estate you can visit today.

The castle grounds, while not much is known of the land in its earliest times, has been proven to have had inhabitants as early as the Bronze Age. This was found during excavations performed in the 1800s. The castle was built on what is known as the Rock of Chillon, an island that would seem to most as one uninhabitable. On the contrary, the natural rock formations served as both natural accommodations and a place from which the land’s inhabitants could strategically control who could pass between the north and south of Europe.

The castle’s history is divided into three key time periods: The Savoy, Bernese, and Vaudois Eras.

The first time the castle is mentioned in writing was in 1150. It was then that Savoy’s Counts controlled both the castle and this mountain and lake passage. In the 1200s, the castle saw additions added so that Peter II could make this the counts’ summer residence.

The Bernese invaded the region and eventually, after storming the castle for a long three weeks, captured Chillon in 1536. For more than 250 years, this would be the Bernese fortress, storehouse for its incalculable arsenal, and a prison. The Bernese divided the lands into twelve minor “cities.” Chillon was the center of administration, and thus became the home of the governor.

In 1798, the region saw the end of the Vaudois Revolution. The Vevey Patriots occupied the castle that year, causing the estate to become property of the Vaudois. This caused the Bernese to finally vacate the castle. It has been in the possession of the Vaudois ever since 1803. By the late 1800s, a major renovation would begin and it is still continuing today.

It seems bizarre to think that some of the first visitors to the castle shared the space with those being held in the dungeons. One such case was Lord Byron, the poet, when he visited in 1816. He was struck by the story of one of the castle’s prisoners and uses the experience to write one of his poems, The Prisoner at Chillon.