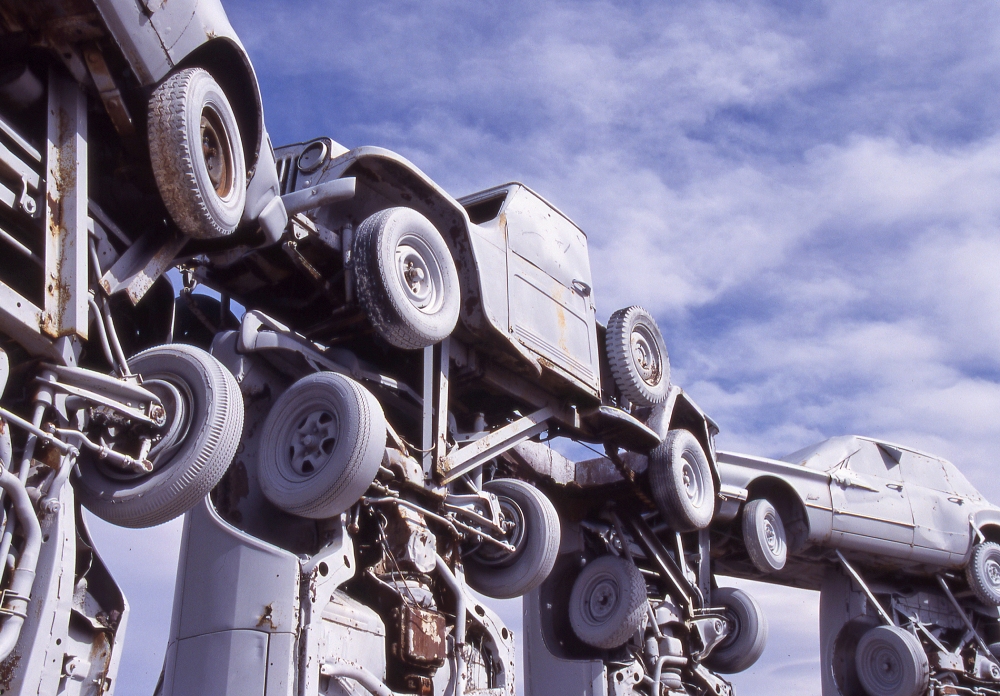 Jim Reinders has experimented with various mediums for creating art his entire life. When he lived in Europe, he had a unique opportunity to study Stonehenge and its purposeful design. He had a strong desire to recreate Stonehenge – both in size and stone placement – which came to be one summer in the late 1980s, with a lot of his family helping out.

Using 39 various classic automobiles, he arranged them in the exact positions, paying great heed to actual size, and arranged them in a circle that measured nearly 100 feet in diameter. Pits were dug so that certain vehicles could be placed to mimic stones that have since fallen down, while others were laid on top of two upright vehicles to create the archways, and then welded for durability. All of the vintage cars have been spraypainted a solid grey, also mimicking the grey color of the stones at Stonehenge.

The guiding light behind Carhenge was Reinders’ dad. After Reinders Sr passed away in 1982, the discussion after his funeral turned to how the family could memorialize their patriarch. The family, with Jim at the helm, returned five years later to build their memorial. According to Jim, a lot of “blood, sweat, and beers” went into the building of this masterpiece. That summer, on the solstice, the family performed songs and poetry, and even a play that they had written.

Over the years, more artwork has been added to the site, which is known affectionately as Car Art Reserves. One of the very first car art sculptures to be added to the reserve was that of Geoff Sandhurst, for his creation of a salmon during spawning, garnering him the top prize that year of $2500.

Another exhibit is known as Ford Season, paying homage to the four seasons of Nebraska, and crafted entirely of Ford vehicles. Carhenge and its many exhibits have been showcased in several movies and television shows, and more than 60000 people come from all over the world to visit each year.