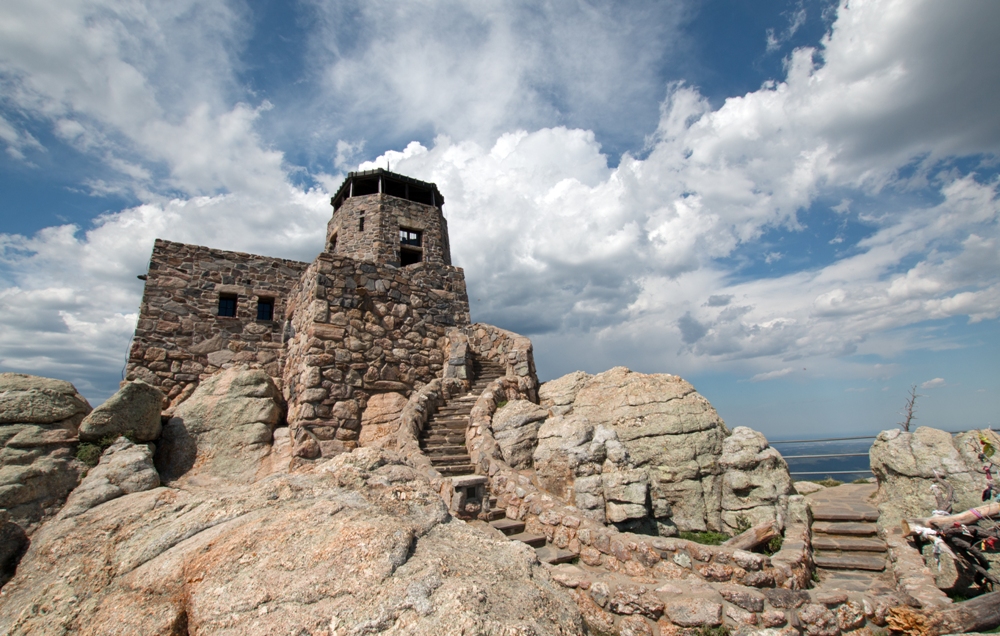 The Black Hills Region of South Dakota is famous for its monuments, rolling hills and plains, and its abundance of wildlife. The highest peak in the state, formerly known as Harney Peak, was renamed in 2016 after a highly revered Native American, Nicholas Black Elk, in an effort to recognize the significance of this peak to the tribes of this region. Reaching into four different states, this mountain top provides a spectacular view in all directions.

Standing at over 7,000 feet, Black Elk Peak stands as sentinel over the entire Black Hills Region. A fire tower made of stone was built on the peak in the mid-30s using stones native to the region. The stones had to be manually carried the four-mile-hike to the peak, as there are no roads that reach the summit. The area around the peak has been designated as a wilderness region, surrounded on all sides by Black Hills National Forest lands.

Not very far from Black Elk is Custer State Park, a nature preserve of over 70,000 acres, with hiking trails and resorts scattered throughout. The nearly 4-mile trail to Black Elk Peak starts by Sylvan Lake, which is located within Custer State Park. While this trail is somewhat difficult for some hikers, it is still rather heavily traveled.

The very tip of the peak, a point of granite, is considered sacred to native peoples, especially the Sioux tribe. This is where Black Elk, as a child, had a vision. Several years after, as an adult, he recounted publicly the vision he saw, evolving into a respected elder and shaman.

The peak itself has witnessed many historical events. In a famous attempt, and subsequent failure, General Custer tried to ride his horse all the way to the summit, however, he didn’t quite make it.

Custer State Park is open year-round. There are quiet hours in place, and if you purchase a 7-day license to camp, it will expire at 6 pm on the last day of your stay.

South Dakota and the Black Hills Region hold a spectacular glimpse into the past history of the United States.