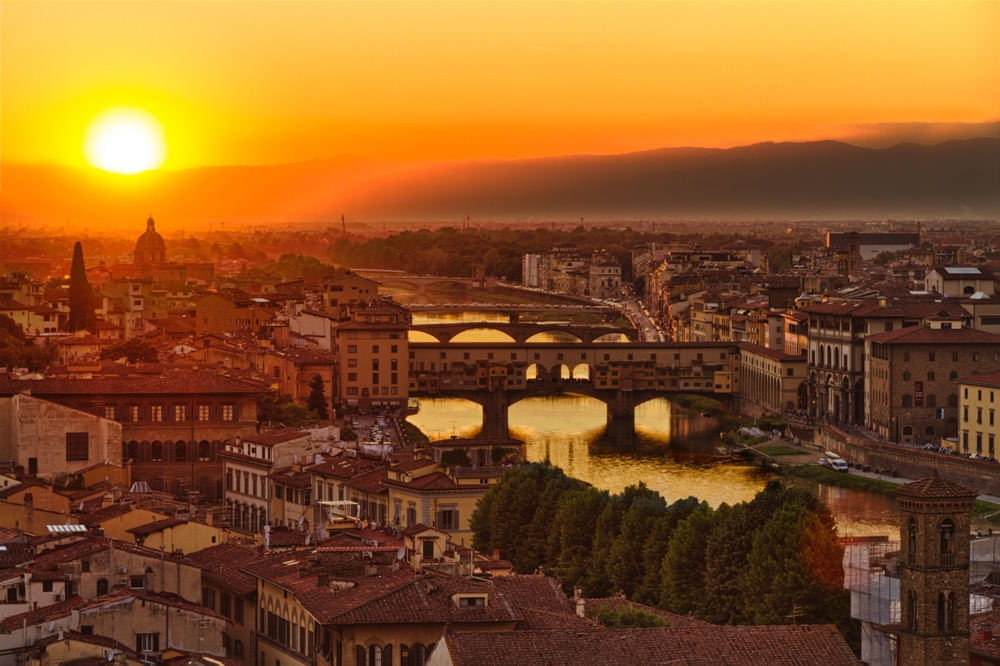 The Ponte Vecchio in Florence, Italy is a marvel of a bridge that dates back to the mid- to late 900s AD. Plaza del Republica is located to the north, near Palazzo Pitti. The bridge is always open and is lined by several different types of shops, cafés, and other eateries.

Also known as the Old Bridge, the Ponte Vecchio was Florence’s only bridge till the early 1200s. The original bridge was damaged during the flood of 1345, but it was quickly rebuilt as it was still a staple among locals and merchants for transportation of travelers and goods. The Ponte Vecchio is the only bridge that was not destroyed by the Germans during WWII. While the Germans did not destroy the bridge, they did leave it inaccessible by destroying the buildings on either side. In 1966, the Arno River once more left its banks and a tremendous flood ensued; however, the Ponte Vecchio was not destroyed this time miraculously.

While it is known that the original bridge was constructed in 966 and was rebuilt in 1345, oddly enough the current bridge’s building is more a mystery. The current bridge has been attributed to Gaddi; however, the design seems to belie that Dominican Friars were likely to have been involved in some respect, if not responsible for its construction entirely. It is known that the Ponte Vecchio was meant to be a means of defense, and that many of the more thematic elements of the bridge were added much later, such as after the shops along the Arno had been sold to merchants and seafaring individuals.

When the famous Medici family moved from the Vecchio Palace to the Pitti Palace, they realized that they would need some type of route to take that would keep them from being in contact with those they governed. The little road that was subsequently built, the Vasariano Corridor, is the little street that runs over the shops along the Ponte Vecchio.

These little shops along the bridge have existed since the 1200s. At one time, there was any type of shop imaginable, such as butcher shops and fish markets; however, these businesses caused horrible odors to linger in the town due to inadequate disposal practices, prompting Ferdinand I to write a decree only permitting jewelers to have shops along the Ponte Vecchio.